CONYERS, Ga. – The Annual Cherry Blossom Festival is an event that many Rockdale county and other surrounding counties look forward to every March which features the understanding of the Japanese Culture.

This event takes place every year at the Georgia International Horse Park which was once the site of the 1996 Olympic Equestrian events.

Cherry Blossoms are significant in Japanese culture. Significance being that they represent the fragility and beauty of life. They represent spring.

” I am an avid attendee,” says Ben . ” Something great for the whole family and there’s plenty of things to do keep the kids entertained.”

Its the pinkest time of the year, and this festival is one of many being held during the month of March. There is the National Cherry Blossom Festival in Washington D.C. and  also one in Macon Ga. not to far from Conyers, Ga..

The Cherry Blossom festival was originated to encourage others to understand different cultures through music, food, and other entertainment.

March is the month in which the Cherry Blossoms are in their peak season for four days to two weeks before they fall from the trees. And this is why people get together to watch the trees and parlay.

In 2006 Conyers received full rights to the festival. And hundreds of people gather at the park every year to celebrate the rich traditions of the Japanese culture.

Not only were there steady performances, there were homemade arts and crafts vendors.

Vendors were happy to be apart of such a great celebration. Many vendors attend the festival annually. Rain or shine, they create and set up shop for the two day experience.

Many attendees walked around from booth to booth checking out the handmade crafts.

“I picked out a personal bouquet of paper flowers from a vendor,” said Tiffany Barnes. ” I named her the paper flourist because she cut all of the flowers by hand. 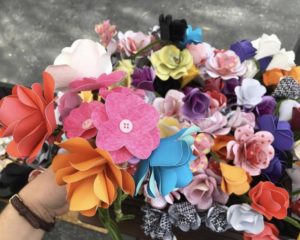 If anyone wanted a good laugh they headed over to Caricature artist and Owner of Toonheadz, AJ Jensen’s booth.

” A guy posted up next to my booth kept laughing at each caricature I drew,” said AJ Jensen. “So I suspected he wanted one and drew one of him.”

The different smells filled the air . The smell of the cherry blossoms in bloom, the smell of a variety of festival favorites and Japanese dishes and cuisine.

From fair foods such as funnel cakes and Italian Ices to authentic bento boxes.The festival made sure everyone was immersed in the culture.

As far as entertainment, it was ongoing. With one act after another there was never a time when there wasn’t someone on the stage.

Local artist performed and 104.7 The Fish and other local radio stations were there to broadcast live. But the highlights included Japanese dancing and demonstrating the ancient art while wearing elaborate traditional costumes.

If you have missed this past weekend full of fun be sure to not miss the opportunity next year to see the Cherry Blossoms at their peak. Also a few reminders, make sure to bring water and try to arrive early to obtain a good parking spot.